Boiling water can also be used to some degree of effectiveness. It is a great option for dealing with clusters of difficult weeds in a garden bed, as the water will have no residual effects on the soil. However, as with most other herbicides, boiling water needs to be applied to the garden very carefully so as to not damage plants that you don’t want to kill.

When using salt as a herbicide it must be applied carefully. It can easily kill surrounding plants, or leech into the soil and affect its long-term health. Too much salt can even sterilize the soil over time. As such, it may be most effectively used to treat weeds that are not surrounded by plants that you care about in the garden, such as weeds that are poking through cracks in asphalt or pavement, or growing between patio stones.

Saltwater solutions should be applied directly to the foliage of the weed. Avoid soaking the roots with the mixture to protect the surrounding soil and plants. The saltwater can be applied using a spray bottle, or it can be poured from a container. If there are other plants nearby, water them generously after applying the herbicide to the weeds to flush out any saltwater that made it into the surrounding soil.

White vinegar is one option, although it has been proven over time to be ineffective on its own. However, when mixed with salt and water, vinegar controls weeds well. As with the salt and water mixture, vinegar must be applied carefully as it can change the pH balance of the soil over time—affecting the growth of future plants.

How to Use Salt as a Herbicide

Salt (sodium chloride) works to kill weeds by dehydrating the plants and disrupting the internal water balance of the plant's cells. Since salt is water-soluble, it is most effectively applied when mixed with water as this makes it easier for the weeds to absorb. Sodium chloride is highly toxic to all plants, which is why caution must be taken in its application. In general, salt is best used as a herbicide for small-scale gardening or weed control.

Dealing with weeds in the garden is a task that most gardeners have come to dread. Pulling them by hand is time-consuming and repetitive, but many gardeners also want to avoid using commercially available chemical herbicides as they pose both environmental and health risks.

Alternatively, if you are applying the salt in an area where the long-term health of the soil is not an issue (like between patio stones, cracks in driveways, etc.) a much stronger mixture can be made such as a 2:1 or 3:1. This amount of salt will definitely affect the pH levels of the soil over time and may cause it to become sterile.

Can Salt be Used to Kill Weeds?

That being said, there are some non-toxic herbicides that can be used to effectively control weeds in the garden—namely, table salt. While no herbicide can ever be labeled as truly ‘harmless’ in the garden (their main purpose is to kill unwanted plants after all!), salt (or sodium chloride) is a natural solution that works well on pesky weeds.

Salt is most effective as a herbicide when it is mixed with water. The recommended strength of the saltwater mixture depends on where you plan to apply the herbicide. If you are applying salt to weeds in a garden bed with other plants that you don’t want to kill, you should start with a weaker mixture—such as a 1:2 mixture of salt and water. 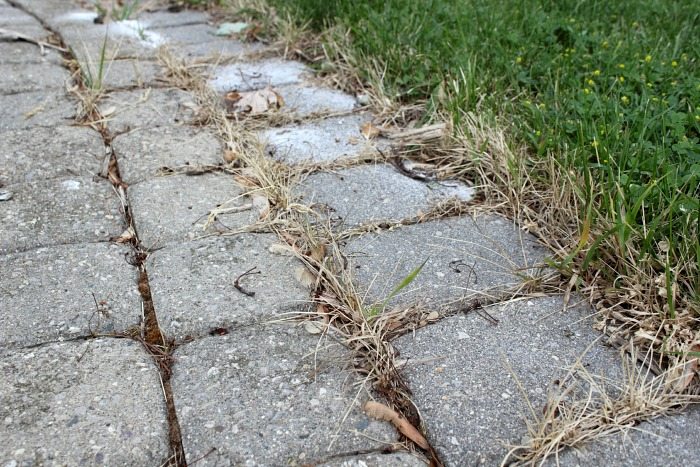 You absolutely can use salt to kill weeds and get them under control if the problem is already out of control, but if you can prevent them in the first place, even better! The earlier you start with this program in the spring, the better. Actually, you can do things to prevent weeds year-round. If you salt your walkways for the mailman in the winter, you’re preventing weeds! I noticed a huge difference this year in the places that I did a really good job of salting during the winter. In the areas where I didn’t salt, the weeds started to grow and I ended up with something that looked like this after salting in the spring.

Well, here we are. Another summer, another chance to try to do a little better job of keeping our huge yard a little more presentable. In the name of honesty, I have to tell you that every year we start out pretty well and but we used to end up failing miserably by the end of the season. We do get a little better every year and we always learn a thing or two! Things like this obvious little trick: using salt to kill weeds. It’s true!

How to Use Salt to Kill Weeds

After weighing all of the pros and cons of using salt to kill weeds, and after gaining such a sense of peace of mind now that I’ve learned to manage this problem, I completely recommend you try this out if you have the same walkway and driveway issues that I’ve had! It feels amazing to be weed-free!

It’s better than the green foot-high weeds that were there the year before, but definitely not ideal. If you have something like this, you can pull them out after they’re dead or just wait, and they’ll eventually just crumble away.

Did you know that you can effectively use salt to kill weeds? These tips will help you do it properly and with amazing results! 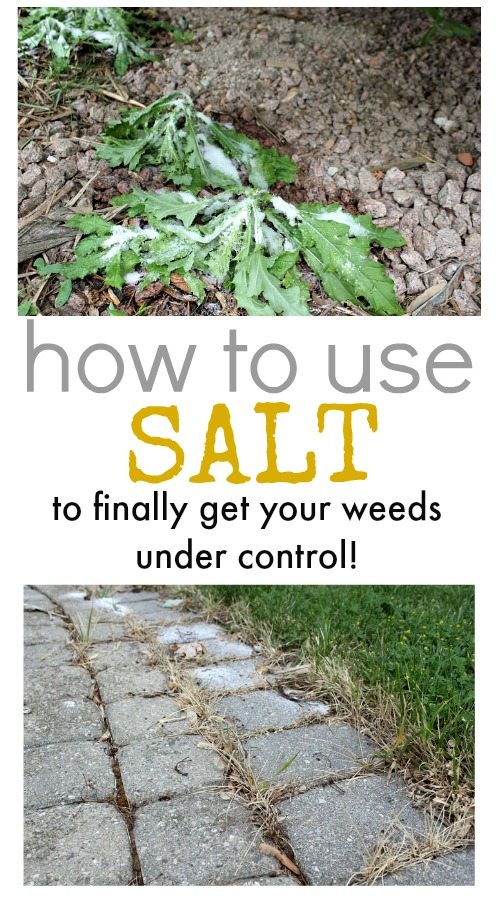 Because this method does prevent any kind of plant from growing, it’s recommended only for areas where you know you’ll never want to plant again, like walkways, driveways, or patios. If you have a really stubborn weed in one of your flower gardens though, you can safely use salt by cutting the top off of the weed and sprinkling about a half teaspoon of salt directly into the weed from the top. Once it’s good and dead, pull it out and almost all of the salt should be removed with it. I’ve also shared a recipe in the past for a homemade weed killer that you can pour right on the leaves of any weeds you want to kill. So that’s a good solution too if your flower bed is really overrun.

The salt does not break down in the soil but rather seeps down to the groundwater. Furthermore, salt is toxic to soil microfauna and earth worms and can lead to a loss of biodiversity. Salt is not only damaging to soil, it also affects water. Freshwater aquatic life is very sensitive to any changes in the salinity of water.

One of these such products is salt. Salt is a raw material found abundantly around the world both in seawater and salt mines.

The biggest marketplace in Europe for DIY, Home & Garden

Concentrations of salt in the soil make it more difficult for plants to absorb water. Certain plants are tolerant of salty environments. Salicornia and halimiones, for example, will thrive in coastal areas. However, these halophytes are only able to cope with these conditions as they have evolved to grow in saline soils.

In conclusion, using salt to kill weeds should be avoided in any areas where you plan to grow crops. There are many other options that will prove less damaging to the environment. However, salt can be used as a last resort to kill off any stubborn weeds in any paved areas, stone patios or gravelled paths.