Stinging nettle is found in northern Ohio and throughout the eastern U.S. It thrives in damp, nutrient-rich soil found in orchards, neglected yards, dumps, ditches and floodplains. Stinging hairs located on the stems and saw-toothed leaves irritate skin upon contact and cause pain, swelling and numbness. Each hair has a sharp point that breaks off and acts like a hypodermic needle when brushed up against. Symptoms last up to a few hours and resolve themselves on their own. Stinging nettle spreads by underground rhizomes, making it difficult to eradicate. The stems are mostly unbranched and grow up to 6 ½ feet tall, usually in large clusters.

Northern Ohio’s humid continental climate, punctuated by Canadian fronts that sweep across Lake Erie, creates growing conditions that ideal for many weeds as it is for perennials. Several weed varieties as well as favored plants, like tulips, require a chilling period, which the northern part of the Buckeye State offers, to thrive. But unlike tulips, Ohio gardeners consider such weeds to have no redeeming gardening qualities.

Poison ivy grows in every Ohio county and on the Lake Erie islands. It is an American native that ranges from Canada to South America. This perennial is well known to those who are allergic to it because its oily toxin causes severe skin rashes shortly after exposure. Time does not seem to decrease the oil’s potency– botanists have acquired rashes after handling 100-year-old plants. The three-leaved plant, usually having a trailing or vine-like structure, often grows under trees, along fence rows and beside structures because birds spread the seeds found in the small, white berries. Washing the affected area with soap and water immediately after contact helps prevent the spread of oil to other skin areas.

Tall fescue is grass that can be found mixed in with turf, along roadsides and in fields. This European native was imported by settlers in 1886. It can grow in many types of soil and climate conditions, and is drought tolerant. The stems of tall fescue are round, smooth and erect, its leaves are rolled in the bud, and the flowers can reach up to 16 inches tall. The seeds are purple. Although it is cultivated in southern Ohio, it grows as a weed in northern Ohio. Endophytic fungus that infects many fescue species makes this plant potentially toxic to native grass species, and to cattle and horses, which can develop health conditions from grazing on it.

Prickly lettuce, a Eurasian native, grows along sidewalks, driveways, in alleys and other areas that are usually dry, although it also grows in moist areas like irrigated fields and garden plots in northern Ohio and south through Florida. It is an erect biennial that grows as a rosette of leaves the first year and then sprouts a taller stem with yellow, daisy-like flowers up to 7 feet tall. The leaves are prickly along the edges and have sharp prickles on the undersides. The plants reproduce by seeds with white, feathery hairs that are carried on the wind. 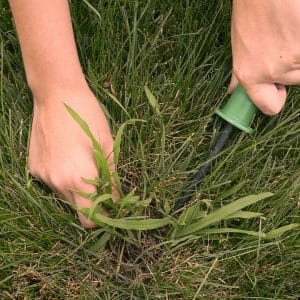 There are two categories of weeds, grass-like and broadleaf. And knowing which category each one falls under steers you in the right direction of a solution. It also helps to know if it’s a perennial or annual. A perennial is a plant that lives two or more growing seasons, while an annual has a one-year life cycle.

What You Need to Know About Weeds

You don’t have to fight Mother Nature alone. Calling in a professional is your best bet for weed populations growing out of control. A well-trained expert knows the best approach, the right timing, and has access to powerful products to treat invasive weeds.

There are many types of this perennial weed, but white clover is the most common. Deep green in color, the plant part has groups of three oval-shaped leaves that often have a dark stripe. Spiked white flowers top off the low-growing plant and provide nectar for bees.