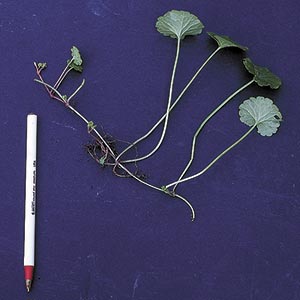 Violet, common blue violet (Viola sororia). Perennial, often tolerated in gardens for its blue-violet flowers in spring, yet hated for colonizing nearby lawn. A typically schizophrenic approach by gardeners! Either accept it in both places or eliminate it from both. Like ground ivy, it can be killed in lawns with broadleaf weed killer—may take repeated applications—but will then return from seed if the grass is not pampered until thick enough to shade out the seedlings.

Click cover to read now!
This issue sponsored by:

Perennial, wickedly persistent Canada thistle—Cirsium arvense, which is not native, despite its common name. A stem and a basal clump are shown here, left of the glove. Note the running roots, which can persist and keep sprouting even through a year or two of frequent pulling or spraying with herbicide. The key to control is to be even more persistent than the plant and to adopt as a mantra what Edwin Spencer writes in All About Weeds, “…any plant can be killed—starved to death—if it is not permitted to spread its leaves for more than a few days at a time.” The annual prickly sow thistle (Sonchus aspera), immediately right of the glove, and biennial bull thistle (Cirsium vulgare), far right, are weedy but not nearly so much trouble to eliminate. Just keep pulling or cutting the annual and biennial thistles before they set seed, and keep the area well mulched to prevent existing seed in the soil from sprouting.

Convolvulus sepium, the great bindweed (pictured) and its smaller-flowered, smaller-leaved, lower reaching cousin C. arvensis, small-flowered bindweed. Perennial. Extensive, deep, easily broken root systems. My own experience mirrors that of W. C. Muenscher who writes in the textbook Weeds, “Clean cultivation…if performed thoroughly, will control bindweed in two years. The land must be kept black, that is no green shoots should be allowed to appear above ground. Cultivation should be at frequent intervals of about six days. Under certain conditions this time may be extended a few days and under other conditions it may have to be shortened to three- or four-day intervals.

Janet’s Journal: Eye to Eye With the Worst of the Garden Weeds

Field horsetail, or scouring rush (Equisetum arvense), is a native perennial often brought into gardens in tree and shrub root balls. Easiest to eradicate if caught early in its tenure on a property, otherwise it must be dug and surviving pieces starved by repeated pulling.

1. Equisetum arvense (Field horsetail) is the most likelly possibility. It has roots that are described by Flora of the Canadian Arctic Archipelago as “pallid-brown, or red brown, or black”. It also has underground stems (rhizomes) that are “dull brown”.