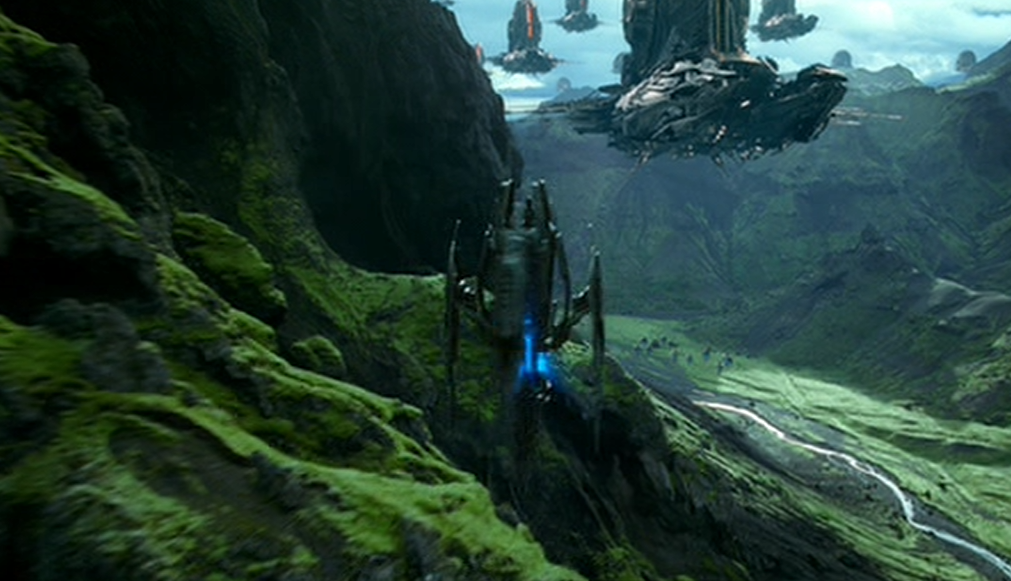 Seeds are specifically designed to kill off organic life instantly, by turning them into Cybermetal. They work by re-configuring into charge mode, while turning on their blue charge lights. They hover low above the ground, and start rapidly spinning. When they detonate, they cause a huge wave of molten lava-like substance that burns off everything but bones from an organic being. Once cooled down, the bones are covered in Cybermetal, which is retrieved by ship. The bones of the animal are left behind. Seeds are launched in large groups by Creator Ships.

In the beginning of Creator Ships enters Earth 65 million years ago, and deploys hundreds of Seeds. The Seeds killed off the Dinosaurs completely, turning them all to Cyber-metal fossils, and the metal is collected.

Later in the film, Cade Yeager discovers that a company called KSI collects these metals, and uses them to design their very own man-made Transformer prototypes. The owner of the company,Joshua Joyce, wants more Transformium to build his Transformers, so he and an illegal black ops squad known as Cemetery Wind strike a deal with a Cybertronian Bounty Hunter known as Lockdown. Cemetery Wind captures and delivers the Autobot Leader Optimus Prime, and Lockdown exchanges him for a Seed. However, Joyce has second thoughts, after Cade convinces him that his prototype leader Galvatron (Tyran)/707.04 Delta is evil, and wants the seed to destroy Earth by making more prototypes. At that moment, Galvatron gains control over Joshua’s Prototypes and attacks the factory. He and the prototypes chase after Joyce and the Seed.

Sow early spring, or in the autumn in mild areas, it will take 3 weeks to germinate. Succesional planting will give a display all summer.

Sow early spring, or in the autumn in mild areas, it will take 3 weeks to germinate. Succesional planting will give a display all summer.

This variety is grown for its unusual shaped ornamental seed pods. Its yellow flowers and seed pods are often used for flower arrangements.

Origin:
The genus Nigella is native to North Africa and southern Europe. It is one of about twenty species in the genus, all of them annual herbs from the Mediterranean region. Several are cultivated in gardens, and one, Nigella sativa, is grown for its aromatic seeds.
Nigella orientalis is native to Western Asia.

Cut Flowers:
Harvest the stems in the morning after the dew has dried. Cut when the flowers are fully open because buds will not open after cutting. Cut the stems with a sharp knife about 3cm (1in) from the bottom of a main stem, at an angle of about 45 degrees as this provides a larger exposed area for the uptake of water. Remove all the lower foliage that would be submerged in water.
Fill sterilised a bucket with luke warm water and add warm sugar water. Place the flowers in the bucket and leave over night to condition before using in an arrangement.
To dry the pods, cut while the pods are still green and somewhat fresh. Tie the stems into a bundle and hand upside down to dry. You can cut the seed pods in half to display the interesting seed chamber structure.

Cultivation:
Prefers well drained soil enriched with manure or compost ahead of planting. Can be grown on light sandy soils.
Feeding is rarely needed but water well and apply complete plant food as growth begins in the spring.
Deadhead to prolong flowering. Leave a few plants to die down and self seed. Others can be pulled up and composted

An early autumn sowing can be made in sheltered areas for earlier flowers the following year. Planted it in the autumn it will send down a taproot and form a rosette of feathery leaves during the winter. As temperatures warm up in Spring, flower stalks shoot up. If it’s a dry spring, give it water and it will grow large and erect. Without water it tends to flop over.

An unusual twist on the classic cottage garden flower, Nigella ‘Transformer’ adds intriguing texture with its uniquely shaped flowers and upright, seed pods. Unlike the Nigella ‘Love in a Mist’ that produces watermelon-like pods, these curious seed pods have long tentacles and are pretty unusual looking. Used fresh or dried the seed pods are a great filler in bouquets. Cut flower production just 12 to 16 weeks.
Growing to a height of 50 to 60cm (18 to 24in), the plants have fine ferny green foliage and produce unusual tall yellow flowers. This species is also a good choice for borders and mass plantings the plants tolerate some drought once well-established. Deadhead to prolong blooming.

Once you see Nigella in bloom, you will always recognise it by its unique mist of airy bracts and foliage. It earns its common name of Love-in-a-Mist from the tangle of ferny, fennel like foliage that forms a mist around the flowers. The airy foliage makes a nice complement to broader leaved plants and is a great filler for use with cut flowers in a vase.
Nigella is ridiculously easy to grow. A hardy annual, it can be sow early in spring or sown directly where it is to flower. Sowing to flowering takes just three months. The flowers are well suited for traditional cottage garden settings or plant in a meadow where the soil is a little on the dry side and not too rich. Once the petals drop, the blossoms transform into little fairy lanterns and the seed pods can be dried for winter decorations indoors.

Sowing: Sow direct in late Winter to Spring or in Autumn
Seeds are best sown in short drills 0.5cm (¼in) deep directly where they are to flower. Sow thinly, once temperatures reach around 18°C (68°F). They prefer a sunny open site but will grow in most sites and soils.
Prepare the ground well and rake to a fine tilth before sowing. Mark the sowing areas with a ring of light coloured sand and label if sowing more than one annual in the same bed. Sow 1mm (1/8”) deep in rows 30cm (12in) apart.
Seeds germinate in approx 21 days. The seedlings will appear in rows approx 6 to 8 weeks after planting and can be told from nearby weed seedlings quite easily. Thin the seedlings out so they are finally 23cm (9in) apart by early summer. Compost should be kept slightly moist, but not wet at all times.

Nomenclature:
The genus name is taken from the feminine of Latin nigellus, a derivative of Latin niger meaning black.
The species name is from the Latin orientalis and means ‘of or from the East’.
The plant’s common name ‘Love-in-a-mist’ comes from the flower being nestled in a ring of multifid, lacy bracts. It’s also called Devil-in-the-Bush. Jack-in-the-green and Lady-in-the-bower. In German, there are comparably poetic names like Jungfer im Grünen (Danish jomfru i det grønne) ‘Maiden in the green’ or Gretchen im Busch ‘Maggie in the bush’.