It’s also true that bizarre people look more bizarre when I’m high on this weed, and I feel like I can read people’s minds, which isn’t always pleasant.

That being said, novice cannabis consumers and people with anxiety disorders shouldn’t use Trainwreck. I’m a chronic marijuana smoker with a high tolerance level who can handle nearly any amount of any form or kind of cannabis (including way too many space cakes eaten in one hour). Trainwreck pushes me near to the edge of an unpleasant paranoia and extreme nervousness, almost to a jangled, frantic place I don’t like to be.

One fun fact is Trainwreck buds sometimes give me a shot of pepper that make me feel like sneezing. Cannabis contains some of the exact same compounds that some types of pepper contain, with the same sneezy effects. These effects are also medicinal. Upon vaporization and inhalation, Trainwreck buds often send a cleansing peppery burst into my sinuses and behind my eyes, giving me clearer eyesight and respiratory pathways.

Paul’s Trainwreck seeds had a 100% germination rate, and I was glad to see a favorable female to male ratio with no signs of hermaphroditism. This strain performed better than the other three I was growing at the same time the same way in a high-C02 LED grow lights grow room. I topped it once before flipping it into bloom phase 31 days after germination, and this created bushy plants with a higher than average number of side branches.

But when I talked to long-time cannabis breeders in Northern California’s Emerald Triangle weed empire where Trainwreck was created, I got a totally different story. These growers agree that Trainwreck is a wickedly potent Sativa, but insisted that the name Trainwreck came from an actual train wreck that happened near Arcata, California.

This was very bad news for them—marijuana growing was 100% not legal at the time, and the large plants were nowhere near ready for harvest. Even if they had been, there wasn’t enough time to chop them, bag them, and get the hell out of there.

Cannabis coffee shop budtenders started warning AK-47 purchasers they should be sitting down in a safe place, and not planning to operate any dangerous machinery or attempt complex tasks, when they were going to use AK-47.

I harvested the earliest-maturing Trainwreck plant after 62 days in bloom. I probably should have let it go on longer, but some of the resin glands were amber, the pistils were changing color fast, and I wanted to try the strain. Harvest time for the other Trainwreck plants was from 65-71 days.

An alternative version of this story comes from another very old grower in Humboldt. He agrees that the original plants used to breed Trainwreck were being guerrilla grown next to a train track in Humboldt County. At harvest time, when the growers first tested this new strain, one of them said, “I’m so high, I feel like I’ve been in a train wreck.” 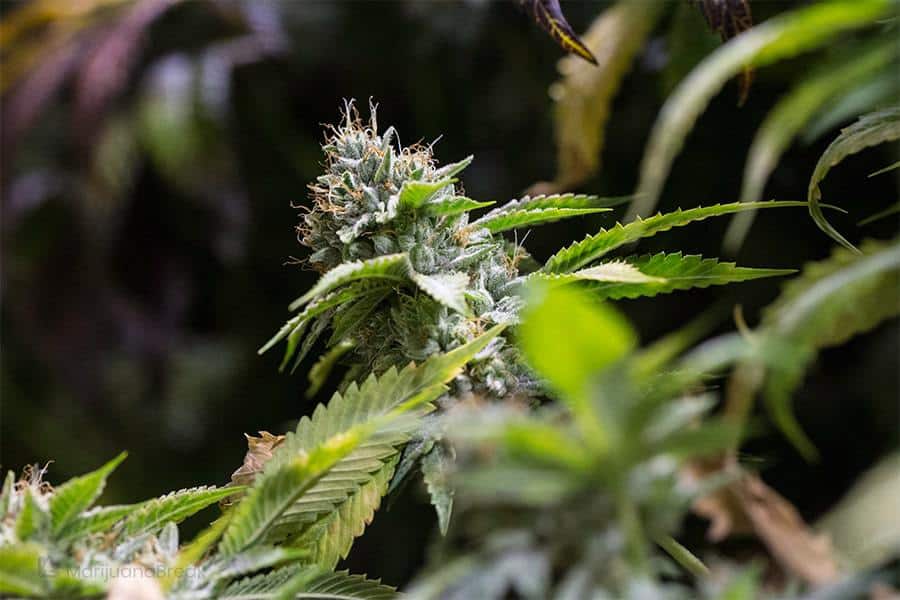 First and foremost, make sure your soil has plenty of N-P-K. Focus on adding plenty of nitrogen during the vegetative stage and phosphorus during flowering.

It is a sativa-dominant (65%) hybrid, but its origins are shrouded in mystery. According to one story, there was a terrible train wreck in the city of Arcata in California sometime back in the 1960s. Nearby, a pair of brothers who were growing marijuana illegally decided to harvest their crops quickly. They were worried that responders to the accident spotted it. Whatever the case, it is a ‘train wreck’ of genetics! Trainwreck is a mix of an Afghani indica and Mexican & Thai sativas.

3 – Once Your Trainwreck Plants Reach Flowering, Let Them Grow!

Trainwreck is yet another marijuana strain with a name that is something of a misnomer. It doesn’t cause you to curl up into a fetal ball or spend days regretting your choice of weed. Instead, smoking Trainwreck will provide you with a clear mental high. With a THC content of up to 21%, though, it is not a strain to be trifled with. You initially feel a sense of euphoria, but this can arrive very quickly.

DID YOU KNOW? The top colas have a chemical that restricts the growth of the plant’s lower branches? Removing it can enable the rest of the plant to flourish!

Congratulations! The soil is now ready for your clones or seeds. Once harvesting draws near, flush a week or two early. Trainwreck plants sometimes finish earlier than growers expect.