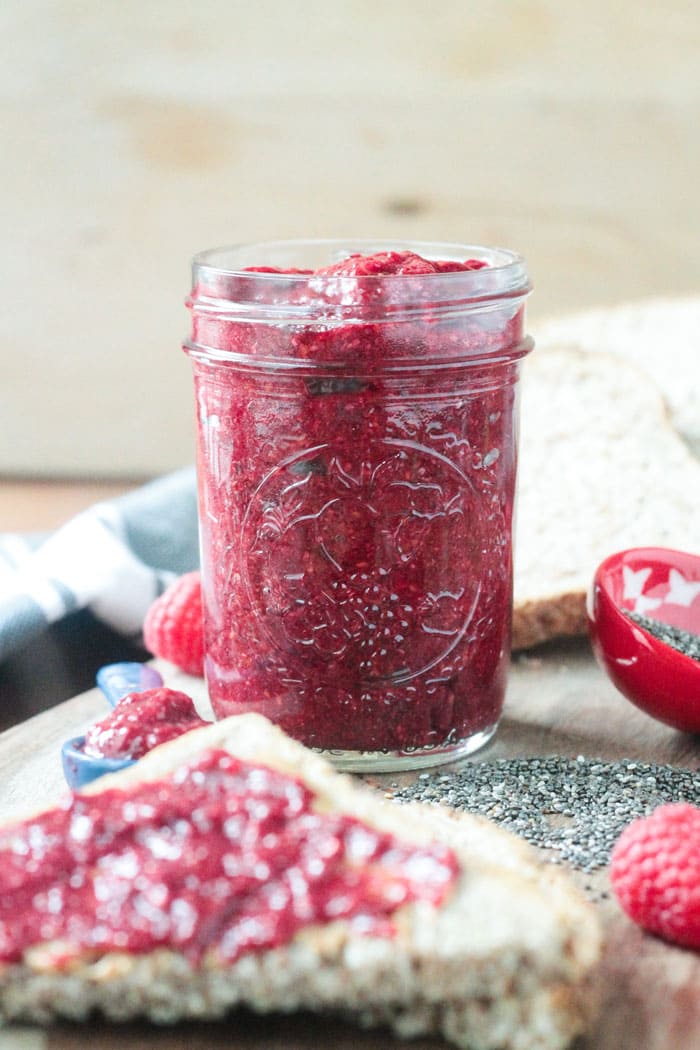 In this chia seed jam recipe, the chia seeds create the gel that holds it all together. Because of their gelling ability, chia seeds make a great egg replacer in baking as well!

You can use this Raspberry Pineapple Chia Seed Jam like any homemade or store bought jam. It’s perfect on toast, as part of a PB&J, a wonderful spread for pancakes or waffles, or a spread on crackers. Add it to smoothies, stir it into oatmeal, or top off some homemade n’ice cream. Or you might just want to eat it with a spoon! How would you use your chia seed jam?

Chia seeds are considered a superfood for good reason. They contain vitamins, minerals, antioxidants, protein, fiber, and healthy omega-3 fats. They are naturally gluten free and can be ingested whole, unlike flax which needs to be ground in order to benefit from the nutrients. They have the potential to regulate blood sugar and lower cholesterol.

If you stock up when they’re on sale, you could be making a different flavor of homemade jam every week!

Organic frozen fruit is pretty easy to find and usually at very reasonable prices. They’re also picked at the peak of ripeness and quickly frozen, preserving all of their wonderful nutrients. You don’t have to worry about them getting over-ripe and “going bad” before you have a chance to eat them. Frozen fruits (and veggies!) will be there for you when you’re ready every time.

A few weeks ago I decided to skip the grocery store for the week and use up what we already had in the pantry, fridge and freezer. It was a great way to save some money and clear out space. Dinners were easy, but packing my son’s lunch proved harder than I imagined. I usually send him with lots of fresh fruits and veggies, but those ran out in the first day or two. And I didn’t even have any peanut butter or jelly. I do, however, always have lots of bags of frozen fruit in the freezer. Just a few ingredients later, I had myself some Homemade Raspberry Pineapple Chia Seed Jam!

Raspberries and pineapple might seem like an odd combo, and now that I think about it, I don’t think I’ve ever seen pineapple in a jam before. But I love the tart/sweet combo. The sweetness of the pineapple allows for the use of less added sugar. You can even eliminate the sugar all together…or you can add a touch more if you like it on the sweeter side.

How To Use Chia Seed Jam

Frozen fruits are great for:

I hope you guys love this Raspberry Pineapple Chia Seed Jam as much as we do. If you try it please come back and leave me a comment below with your feedback. You can also find me on social media. Be sure to tag @veggie_inspired and #veggieinspired so I’m sure to see it. Enjoy! The results obtained indicated that fortification of pineapple jam with chia seeds improves the nutritional value (protein from 0.53% to 8.60% and fiber from 4.83% to 21.02%) without affecting texture. Although chia seeds have been accepted for their functional properties, consumers were not willing to exchange sensory features of pineapple jams for the functional properties and health benefits that are associated with chia seeds. This fact should be considered at the early stages of product development. Nonetheless, the addition of chia seeds at lower amounts (e.g., 6.25% w/w) appeared to have little effects on the sensory characteristics and to be more accepted, implying that in product development, formula optimization in addition to sensitization on the health benefits of functional products is important. Furthermore, the process improvement and shelf life needed to be determined for practical applications.

The authors declare that they do not have any conflict of interest.

The pH of the pineapple jam samples was obtained as described by Egan, Kirk, and Sawyer ( 1985 ). The total soluble solids in the final jam were measured using a refractometer. The refractometer was first set to 0° Brix using 1 ml distilled water, since the refractometer in the laboratory had a maximum limit of 30°, we diluted 5 ml of each sample with 10 ml of distilled water to acquire a ratio of 1:2 then measured the Brix then the readings recorded.

After assembling the necessary equipment, the pineapples were washed thoroughly using running tap water to remove any dirt that was on the surface, the pineapples were then trimmed, peeled, and decored. The peels were placed separately for further washing as they were to be used as pectin. The pineapples were sliced then pulverized using a household blender to obtain fruit pulp, which was collected in a pre‐weighed glass jar. The °Brix of the fruit pulp was measured using a refractometer and pH by pH meter. The pineapple peels were washed thoroughly, pulverized using a household blender to extract pectin, and harvested in a clean metal container then added at a rate of 1%. The ingredients were placed in an oven to cook (the fruit pulp and pectin together) stirring while adding sugar (up to 50%) for 3 hr until the jam obtained the desired consistency. The jam was emptied into five different sterile containers; each was filled with 500 ml of the jam. Chia seeds at different concentrations (6.25, 12.5, 25, and 50% w/w) were added to three (triplicates) of the jam‐filled containers, and three containers were left with no chia seeds as control samples.

The sensory attribute values are means±standard deviations from three replicates. Different alphabets in one row indicate significant differences among mean values according to the Tukey’s test (p < 0.05). Trials A, B, C, D, and E represent the control, 6.25%, 12.5%, 25%, and 50% w/w additions of chia seeds, respectively.

Pineapple is one fruit that is used for making jam that is an excellent source of vitamin C and manganese among other nutrients. In 100 g, the fruit contains 12 g carbohydrates, 0.2 g fat, 1.2 g protein, and 1.4 g fiber (Moreiras, Carbajal, Cabrera, & Cuadrado, 2001 ). However, when pineapple is processed into jam, the percentage of nutritional content drops significantly resulting into trace fat and concentration of carbohydrates, which mainly comprises of sugar. Moreover, jams normally have lower vitamin C content compared to their fresh fruits counterparts as a result of the heat to which they are exposed during processing (Naeem et al., 2017 ). One approach to the solving of the problem of nutrient loss is to fortify the jam with nutrient‐dense food products. Through fortification, a processor can replenish lost nutrients during processing or enrich the nutritional value of a food by adding extra nutrients. For example, Toves ( 2004 ) demonstrated the fortification of jam with soluble dietary fiber and Lavelli, Vantaggi, Corey, and Kerr ( 2010 ) fortified apple puree with green tea extract equivalent to that present in a cup of green tea. Jams can therefore be fortified as well as used as delivery vehicles for a number of nutrients including functional components. Functional components in food are chemicals that have physiological benefits and/or reduce the risk of chronic disease beyond basic nutritional functions (Ansari & Kumar, 2012 ). Among the foods that have functional components are chia (Salvia hispanica) seeds. These are unprocessed, ready to eat, whole grain foods containing up to 39% oil which has the highest known content of α‐linolenic acid (ω‐3) of up to 68% compared to other natural sources (Porras‐Loaiza, Jiménez‐Munguía, Sosa‐Morales, Palou, & López‐Malo, 2014 ). These healthy omega‐3 fatty acids aid in reduced risk of cardiovascular diseases. Chia seeds also contain carbohydrates (26%–41%), dietary fiber(18%–30%) that aids in reducing the risk of type 2 diabetes, proteins (15%–25%), antioxidants such as gallic acid, which fight free radicals in the body that cause degenerative diseases, a high amount of vitamins, and minerals such as calcium (Timilsena, Adhikari, Barrow, & Adhikari, 2016 ). Chia seeds are also free of cholesterol and trans fats, and limited allergen tests have shown no adverse reactions to chia seeds (Ayerza & Coates, 2004 ).

Sensory evaluation was conducted in isolated booths at the Dairy and Food Science and Technology laboratory. Thirty‐two semi‐trained personnel conducted the analysis. Each panelist was given plastic cups filled with the samples that were coded using three alphabets codes, and each sample was tested in triplicate. Before the analysis, the entire panelists were given oral instruction on the attributes (color, flavor, texture, spreadability, and general acceptability) and the direction of testing but randomly. They were also provided with a palate cleanser (water) and a slice of bread for spreadability, and also, scorecards were provided to each panelist. The score sheet contained a five‐point hedonic scale, with the key words rating: dislike extremely (1), dislike (2), neither like nor dislike (3), like (4), and like extremely (5).

I had my first pineapple when I was 10 years old. Growing up in the north part of China, I never saw them in the stores. Back then shipping fruits from different provinces was rare. However, I learned about them in school and remember seeing them on flash cards.

It was love at first bite, same for my friends. For a long time, pineapple was my No.1 favorite fruit. I suppose part of the reason is because it was so rare. Now, with it available in most stores all year round I will often buy one. Even my 3-year old son loved it ever since I offered it to him.

Let me tell you how easy to make this pineapple jam!

Lately, he loves adding jams into his yogurt or homemade milk kefir. With no-added-sugar and preservatives, this healthy, sweet, and nutritious homemade pineapple jam is perfect for him.

One day my mom went on a trip to the south part of China and came home with a pineapple. I still clearly remember that day when I and all my friends in the entire neighborhood saw one for the first time. What a funny looking fruit with green spiked “hair” on the top! My mom cut the pineapple open and briefly soaked the pineapple flesh in salty water. She was told it helps to improve the taste by enhancing the tropical sweet and tart flavor.