The winning startup of Medellin will join the Regional Summit, where it will have the opportunity to be selected to join the 3 months Growth Program Online and the Global Seedstars Summit – with the chance to win up to USD500.000 in equity investment. Seedstars is a catalytic platform for high growth emerging market startups.

After working closely with the entrepreneurs, we will invite the top 8 to take part in jury interviews with top investors and compete to be crowned the most promising seed-stage startup of Seedstars Medellin 2019. All the startups who will be selected to the local jury panel will also be rewarded with one free month of our brand new Investment Readiness Program.

Seedstars World is coming to Medellin!

1) Have a Minimum Viable Product (MVP)

You can look forward to an event filled with disruptive tech, inspirational discussions, networking sessions and world class mentoring on critical issues often encountered in the ecosystem!

Apply Now! And get the opportunity to represent your country and win a free trial to our investment readiness program!

The 20 best startups from Medellin will be invited for a training delivered by our own Seedstars team as well as local & regional mentors! 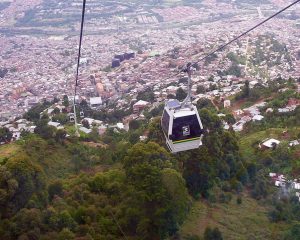 Medellin was the first city to use gondola technology, originally developed for tourism, as a type of urban mass transit. In Medellin, the increased mobility provided by the cable cars, combined with investment in community schools, housing, community projects and other infrastructure, helped increase employment and decrease crime in areas that had recently had high levels of violence and poverty. A study that examined the effects of cable cars construction on neighbourhood violence showed that the decline in the murder rate was 66% greater in neighbours with access to cable cars than in similar neighbourhoods. Furthermore, the carbon emissions of the cable cars were relatively low compared to other modes of transport, and they generated relatively low levels of local air pollution. More recently the Metrocable system has become a tourist attraction within Medellin, as it provides great views and easy accessibility to Parks as well as other parts of the city.

The success of the Medellin cablecars was a part of a combined set of urban infrastructure and social investments. The success of Metrocable lead to the growth of the system in Medellin, its replication across Medellin and its spread to other cities worldwide. It is unclear if the system has changed Medellin resident’s connection to nature, but it has encouraged people to walk and use public transit.

So far, we have been looking at how transition risk affects the balance sheets for companies, investors and countries. But our transition risk methodology is also being considered as an application to land use in Colombia – to our knowledge, this is a world first.

“ But the very thing that makes it so beautiful, its climate, also threatens that hard-won peace and stability.” Paula Pagniez | Director, Climate & Resilience Hub Americas

Transitioning economies away from fossil fuels

While in Colombia we are working with a sub-national government, resilience strategies can be applied to national governments, corporates and investors. As we transition to a Net Zero carbon emission and climate resilient economy, the traditional risk-reward model can be redefined: resilience is the reward for taking steps to mitigate climate change, and while the result might be higher returns, or lower costs, resilience offers additional value that transcends both.

While we are working on the ideas that can be implemented today, our role in the financial sector must be to dream the art of the possible with governments, investors and businesses, to develop the innovations required to cover not just the widening of the protection gap as the effects of climate change are more keenly manifested, but to build the resilience required to prepare for the future.

For several decades, natural catastrophe modelling has helped the insurance industry understand risk events and quantify their financial impacts. But now, the industry is ready to go a level deeper, with analytical capabilities that help us understand climate-related financial risks and the systemic approach required for resilience in the face of climate change.