Jurassic Purp from Salyer Genetics is a cross of Cherry Pie and Big Sur Holy Weed x Lil Purp. This THC-dominant strain features passionfruit-like flavors of grapefruit and pineapple complemented by a musky gas, and it has light green flowers with dark purple accents and pink pistils.

Jurassic Purp from Salyer Genetics is a cross of Cherry Pie and Big Sur Holy Weed x Lil Purp. This THC-dominant strain features passionfruit-like flavors of grapefruit and pineapple complemented by a musky gas, and it has light green flowers with dark purple accents and pink pistils.

It is included in an evolving list of plants carefully researched and chosen by RHS experts. Divided into 3 groups these lists, linked below, are maintained by a team of RHS staff and are reviewed annually.

This plant will provide nectar and pollen for bees and the many other types of pollinating insects.

A large, clump-forming deciduous perennial, that can reach up to 1.2m high and 2.5m across in ideal conditions. Leaves are thick, rounded to heart shaped, mid green to glaucous, and increasingly puckered and ribbed as they age. Produces loose clusters of pale purple flowers, on stems up to 1m high in summer 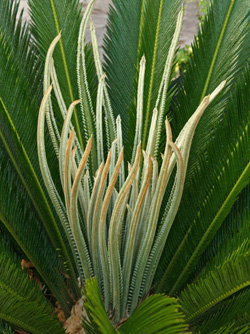 The Cycad Amphitheatre at Kirstenbosch Botanical Gardens in Cape Town, South Africa showcases numerous species of these ancient plants.
Cycads are an ancient group of vascular plants that were once a prominent component of the world’s flora. The oldest cycad fossils date to the early Permian (280 million years ago) or late Carboniferous period (300–325 million years ago). During the Jurassic Period they were so common that the period is sometimes referred to as the “Age of Cycads” (along with the dinosaurs). In the modern world they are restricted to tropical and subtropical regions and are no longer a dominant plant type. As a group they have not changed much since the Jurassic, compared to the major evolutionary changes that took place in other plant groups.
A group of sago palms, Cycas revoluta, in Audubon Park, New Orleans.
The greatest diversity of these “living fossils” is in South and Central America. More than 70% of the world’s cycad species occur in hotspots of diversity there and in Australia, South Africa, Mexico, China and Vietnam, but they also occur in the southeasten US, Asia, India, Polynesia, Micronesia and elsewhere. They occupy a variety of habitats. Some are native to wet rainforests while others are from semidesert climates; others grow in grasslands or seasonally dry forests. They may be found growing in rich, organic soils, sand, or rock, in swampy soils or even in halophytic (salty) soils. Some species grow in full sun, while others need full to partial shade. Some even tolerate frost and snow.
Cycads (Cycas revoluta) used as ornamentals with real palms (taller, center plants) in a residential landscape in eastern San Diego county.
With large compound leaves and often a thick trunk, they superficially resemble palms – and therefore often have a common name including “palm” even though they are not related to true palms – but are actually most closely related to gingko! Many species are used as ornamental plants in mild climates and a few are grown as indoor or house plants in colder areas. Many species have restricted ranges and are facing possible extinction in the wild. Cycads are long-lived, don’t reproduce frequently, and most populations are small, putting them at risk of extinction due to unscrupulous collection from their natural habitats, habitat destruction and devastating environmental events (floods, fire, drought, etc.). All species of cycads are CITES* regulated, although seeds from species on Appendix II are not.
Encephalartos horridus.
Cycads have a cylindrical, usually unbranched, trunk of spongy wood. The evergreen leaves grow in a rosette directly from the top of the trunk, creating a crown of foliage as the plant ages and the older leaves fall off. The leaves are often quite large relative to the size of the trunk. The pinnate leaves are typically hard and stiff or leathery, although they are very tender when they first emerge.
Sago palm, Cycas revoluta, producing a new flush of leaves.
The central leaf stalk either has leaflets emerging perpendicular to the stalk (compound) or the leaf edges are so deeply incised they appear compound. Leaflets can be directly opposed or alternating, and smooth-edged or toothed. The leaf stalks are produced in varying numbers, usually in one or more flushes each year. The trunk ranges from a few inches to many feet tall, depending on the species but in some the trunk is buried so it is not apparent. Plants generally grow slowly and live a long time. Some specimens are estimated to be hundreds or perhaps a thousand years old.
Cones of various species of cycads.
Cycads are dioecious (male and female reproductive parts are on separate plants). Like other gymnosperms they produce cones instead of flowers. Many of these cones are very ornamental. Pollination is often accomplished by beetles, especially weevils, or small bees. Some species of cycads produce heat or odors to attract these pollinators. As the cone matures, it opens to reveal the large seeds.
Female cone and seeds of sago palm, Cycas revoluta.
The mature seeds tend to be colorful – often bright red, purple or yellow – to attract a variety of birds and mammals which disperse the seeds.
There are over 300 described species of cycads living today, in 10–12 genera and 3 families (and several more extinct genera and families). There are likely many more undescribed species, based on the rate of discovery in recent years, especially in Asia and South America where endemism is high. The three families can be identified by looking at the central stalk of the leaf.

Container-grown sago palm, Cycas revoluta, kept in a Wisconsin greenhouse for about 25 years from a 3 inch offset.
There are many species of cycads that are easy to grow as houseplants. The growing medium must have good drainage. Cactus mix works well, or use a peat-moss based potting mix amended with 30-40% coarse sand and/or Perlite, horticultural pumice or baked clay granules. They do not mind being root-bound, so they don’t need frequent re-potting and can be underpotted.
Encephalartos altensteinii, perhaps the worlds oldest pot plant, in a greenhouse at Kew Gardens, London. It arrived at Kew in 1775 after a two year voyage from the Eastern Cape of South Africa. It was one of the first plants moved into the new Palm House in 1848.
They are best repotted in spring or summer. Although cycads in general are slow growing and will tolerate neglect, with sufficient light, moisture, and nutrients many will increase in size and mature quite quickly.
Cycads tend to have an episodic growth pattern, with each flush of new leaves emerging all at once. In habitat, many cycads produce leaves, at most, once a year and produce cones only sporadically. As houseplants, they may only produce leaves every two years and remain somewhat the same size for many years (one reason they can be excellent as bonsai specimens). However, most species of cycads can cone every year and produce multiple leaf flushes each year with the proper light and fertilization (with a high nitrogen fertilizer; but be aware that over-application can kill plants).
New frond of Cycas revoluta unfurling.
Most cycads need to have their growing medium kept uniformly moist (but with good drainage!). This is critical when plants are leafing out, from emergence until they begin to harden several weeks later, otherwise the tender new growth may scorch or the leaves will harden in a curled instead of flat position. However, one of the most common causes of cycad death is over-watering, so moisture levels should be monitored carefully.
Other problems include infestations of scale insects or occasionally mealybugs which can be difficult to control. Container-grown plants can be moved outside seasonally but be sure to acclimate the plants to brighter light to prevent sunscald, and check carefully for pests before moving indoors in the fall.
Encephalartos trispinosus.
The older and lower leaves of cycads can be removed to improve the appearance of the plant. Cut off any leaves that have turned yellow or brown at any time, removing them at the base near the trunk. If all the leaves are removed, the plant should produce a new flush of leaves.
Dioon merolae.
Unless you are really into plant propagation, you probably want to just buy and enjoy purchased plants. However, cycads can be propagated by seeds or division. Seeds have no dormancy, so must be planted when very fresh but even so germination is often slow and variable.
Cycads as a street planting in the Garden District of New Orleans.
Many species eventually produce offsets at the base of the plant, or occasionally in the crown, which can be separated and potted up once they are about 2 inches in diameter. Remove the “pup” from the parent plant with a trowel, shovel or knife, and pot up with the same growing medium as for a mature plant. Most or all of the leaves should be removed and roots are not essential as the pup will produce a new set of both roots and leaves once it gets established. The small plant should be positioned so that half of the trunk is submerged in the growing medium and half is exposed. Water deeply but sparingly until roots have formed (a few months) or it might rot. A new leaf or flush of leaves will be produced after the roots are established.
– Susan Mahr, University of Wisconsin – Madison
*CITES = Convention on International Trade in Endangered Species