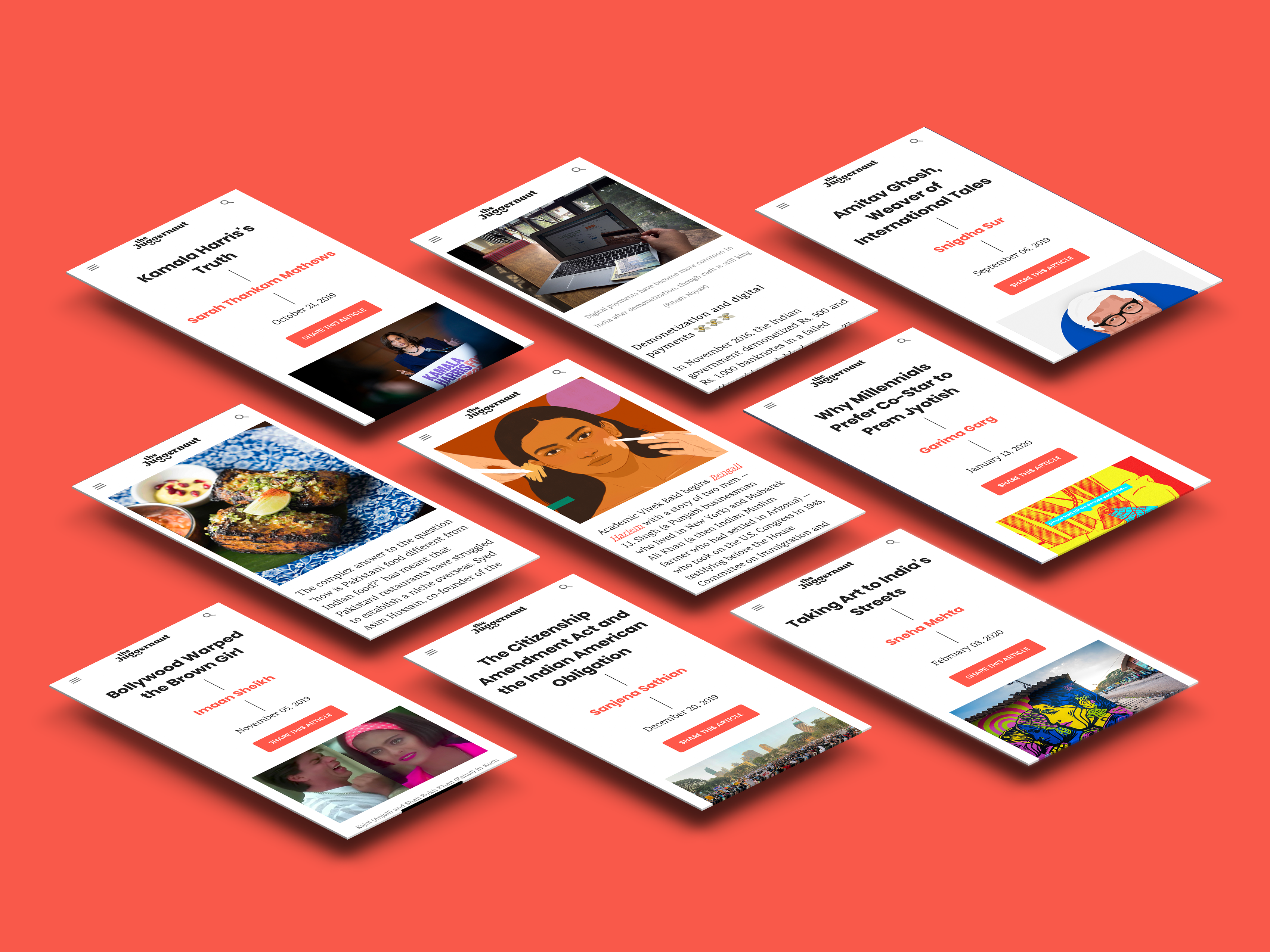 Sur is living the stories that she is working to tell. Born in Chhattisgarh, India, she grew up in the Bronx and Queens in New York City, and spent time living and working in Mumbai, India. Since founding The Juggernaut, her goal for the publication has been to be a place for not just South Asians, but for “anyone who has a form of curiosity and appreciation” for South Asian culture.

The Juggernaut is part of a growing number of media companies trying to directly monetize off of subscriptions instead of advertisements, such as The Information, The Athletic, and even our very own Extra Crunch. If successful, the hope is that paid subscriptions will prove more sustainable and lucrative than advertising, which still dominates in media.

Currently, The Juggernaut charges $3.99 a month for an annual subscription, $9.99 a month for a monthly subscription and $249.99 for a lifetime subscription to the news outlet. It also offers a seven-day free trial (with a conversation rate to paid at over 80%) and has a free newsletter, which Sur says will remain free to bring in top-of-the-funnel customers.

One year and a Y Combinator graduation later, The Juggernaut has worked with more than 100 contributors (both journalists and illustrators) to provide analysis on South Asian news. Recent headlines on The Juggernaut include: The Evolution of Padma Lakshmi; How Ancestry Test Results Became Browner; and How the Death of a Bollywood Actor Became a Political Proxy War. The network approach, instead of a single newesletter approach,aggreff is working so far: Sur says that The Juggernaut has garnered “thousands of subscribers.” During COVID-19, The Juggernaut’s net subscribers have grown 20% to 30% month over month, she said.

Beyond pace, The Juggernaut is looking to build up its subscriber base by writing stories that require deep, creative thinking. The publication intentionally does not cover commoditized breaking news, which could have the potential to bring in more inbound traffic, or anything that doesn’t have a South Asian connection.

“Sometimes at media companies people over-hire and over-promise, and then don’t deliver on the profitability or return,” she said. For this reason, The Juggernaut largely works with “freelancers who would probably never join any specific publication,” Sur said. While The Juggernaut hopes to have full-time staff writers eventually, the contributor approach helps temper spending.

On the heels of this growth, The Juggernaut announced today that it has raised a $2 million seed round led by Precursor Ventures to hire editors and a full-time growth engineer, and expand new editorial projects. Other investors in the round include Unpopular Ventures, Backstage Capital, New Media Ventures and Old Town Media. Angels include former Andreessen Horowitz general partner Balaji Srinivasan; co-founder of Kabam, Holly Liu; and co-founder of sports-focused publication The Athletic, Adam Hansmann.

Snigdha Sur, the founder of The Juggernaut.

But Sur is purposely pacing herself when it comes to expenses in the early days. The team currently has only three full-time staff, including Sur, culture editor Imaan Sheikh and one full-time writer, Michaela Stone Cross.

Using your base menu, select “Upgrade Car” from parking spot facility containing a vehicle to see how it will upgrade. Doing that action expends this kit and transforms the vehicle.

Crafting Items cannot be used on their own, but are consumed as components for Upgrades, also are used in crafting of Consumables, Weapons, Ammunition or as fuel in some Facilities Actives.

Used for crafting, or upgrading facilities.

Crude alcohol equally suited for mixing into drinks, or use as disinfectant.

If we have workshop at home we can break this down into a lots of parts.

Renewable (unless all Plague Hearts are destroyed)

Used in upgrading gardens and farms, as well as for boosting their yields. Assorted vegetable and herbs seeds, useful for growing crops.

Used for crafting, or upgrading facilities.