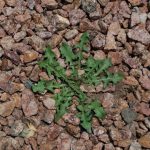 If elbow grease isn’t for you, then you can always look down the chemical route.

By laying a later of landscape fabric / weed control membrane it acts as a ground stabilizer so stone and soil do not mix.

The chemical free / preventing weeds naturally.
Following these steps to prevent weed growth in gravel / gravel driveway is best achieved BEFORE you’ve laid any gravel. However, you can obviously move gravel out of the way and follow these steps (it’s just a little more tricky).

Common gravel weeds range from grassy weeds to woody weeds. Broadleaf, henbit, purslane, chickweed, dandelions all find it fair gain when it comes to rearing their heads between the stone.
So, how to stop weeds from growing in gravel?
Well, the honest answer, you’ll never completely get rid of weeds existing in your drive. Weed seeds can travel through the air or via birds / insects. If there’s dirt, moister and sunshine then weeds will soon geminate.
However, there are precautions you can take to stop many of the weeds shooting up from the ground below. So keeping on top of keeping your gravel weed free is that little easier.

4. Another layer of Landscape Fabric.

For the small amount of weed that may appear from then on you’ll find they’re small and with a tiny bit of elbow grease can easily be pulled. Much easier to manage weeds if there are only a couple every few weeks rather than a field full.

How to stop weeds in gravel. It’s a common sight seeing weeds in gravel driveways. If you’ve not laid a good, weed control fabric foundation or just don’t keep on top of removing those weeds that have planted themselves in the gravel, it’s not long before there’s more weeds than gravel in your drive way and the only way of getting to your car is by using a machete and dodging the man eating fly traps!

The final step is to lay a layer of decorative aggregate. You need a decent layer (3 to 5 inches) but not too deep as this can lead to puddle and weed growth.

Using a compacted subbase (Granular base / hardcore base) will ensure the decorative aggregate is evenly distributed plus allowing for drainage eliminating puddles.

A layer of weed control membrane making it difficult for weeds to pop through and for most weeds to bed themselves. 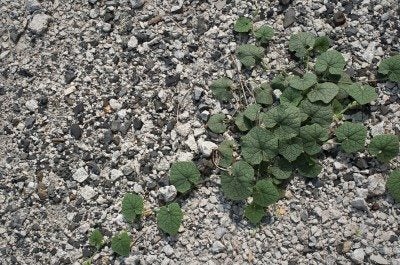 Although we have a poured driveway, my neighbor is not so lucky and the rampant weeds coming though gravel rocks are enough to drive her crazy. She spends the better part of her yard maintenance on the removal of these gravel weed plants. What are some methods for preventing weeds in gravel and/or removing these persistent gravel weed plants?

Ideally, your gravel area would have a weed barrier laid prior to laying the gravel. Perhaps this didn’t happen, or the barrier (plastic sheeting) is old and full of holes. You can still push aside the gravel, lay a barrier (after eradicating the weeds with a chemical weed killer), and return the gravel to the driveway or like. Lots of work, but it will keep the weeds from growing in the gravel.