The main types of cannabis grow lights are HID, or high-intensity discharge, CFL or compact fluorescent lights, and of course, LED or light-emitting diode lights. HID lights were the most commonly used cannabis grow lights when indoor growing first became popular in the 1990s. This was because they produced just the right number of lumens to grow cannabis indoors.

Not only are LED lights more energy-efficient , but you’ll also save on water usage as well. As you are now aware, HID lights use a lot of energy, which in turn produces more heat. This dramatically increases the temperature of the grow room, causing your plants to consume more water. Cannabis is already quite the water hog when compared to other plants and growing even just a small amount of plants uses a lot of water. Any way to reduce water consumption is great for the environment, not to mention great for your utility bill. 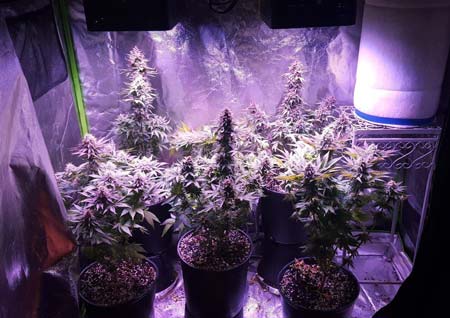 I hadn’t heard of them until relatively recently (it seemingly started becoming very popular around late 2016 or early 2017).

Kind LED panels have recently been becoming very popular on the cannabis growing scene and seem to be getting great results especially when it comes to yields. However, they are definitely pricey even for LEDs, so that is a big consideration!

These grow lights use huge COB (Chip on Board) LED “bulbs”. Each COB is incredibly bright and intense because they contain multiple LED chips in a small area. COBs produce more intense light than other types of LEDs, and each COB uses a significant amount of electricity. Cree is most popular brand of COBs.