I was completely charmed, however, by the tiny cultivar Epimedium x youngianum Niveum, with small pearl-like buds that open into pure white flowers over the plant’s six-to-eight-inch-tall foliage.

Don’t get the idea that this perennial will claim center stage in the garden, however. Epimediums are not large, showy plants such as bleeding hearts (Dicentra) or foxgloves (Digitalis), but will fill the role of a character-filled supporting player, like lily-of-the-valley (Convallaria majalis) or forget-me-not (Myosotis scorpioides).

The type I’ve grown the longest is Epimedium x rubrum, a hybrid that grows eight to 13 inches tall and spreads faster than many of its kin, forming a clump that is roughly a foot in diameter. New growth, with appears in early spring, has a reddish tinge; the three quarter-inch flowers which follow have rosy red sepals and creamy petals.

In China, many epimediums grow on limestone, but they’ve proved adaptable to our acidic soils. And though unclean dividing practices can make them susceptible to foliar viruses, these tough plants are relatively pest free and unpalatable to many animals, including rabbits and deer.

Most epimediums grow between six inches and two feet tall and offer attractive heart-shaped to arrow-shaped foliage. Depending on the species, the number of flowers produced can vary from just a few to more than a hundred on each wire-like stem. Individual flowers typically last just a few days and then shatter before being replaced by new blooms. Flower colors include white, pink, rose, purple, yellow, orange, and red, or can be bicolored or combinations of several colors, but blooms are typically small.

Last week on a nursery-hopping trip to Georgia, I added two new epimediums to my collection, both offering delicate white flowers. The largest of the pair, Epimedium grandiflorum, lives up to the fairy wing moniker, with eye-catching, long-spurred flowers that bloom for a month or more above foliage that grows to 15-inches tall.

A perfect addition to any woodland shade garden, epimediums are an easy-to-grow perennial ground cover or clumping plant that thrives in well-drained, moisture retentive soils. Once established, most species will tolerate dry shade, making them an excellent choice for planting among shallow-rooted trees and shrubs, or in drought prone areas.

To grow epimediums in Southern gardens like ours, take care to amend heavy soil to improve drainage and keep the plants in the shade. Experts recommend shearing away old foliage in late winter before new growth emerges. Divisions are best taken in fall, from late August into early October. 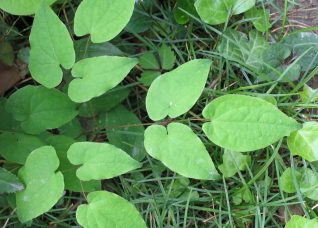 China, the Himalayas, and Japan.

The leaves, stems, and flowers.

What is it used for?

Before you decide to take any medicinal herb or herbal supplement, be sure to consult with your health care professional first. Avoid self-diagnosis and self-medication: Always be on the safe side!

Parts of the plant used: