This lawn can be maintained at a 2 inch height for a manicured look or up to 4 inches to let the clover bloom in the summertime.

Establish Dog Park in areas that get four or more hours of sun; once established Dog Park has some shade tolerance. For shadier sites that get less than four hours of sunlight, check out PT 769 R&R Eco-Turf Mix. 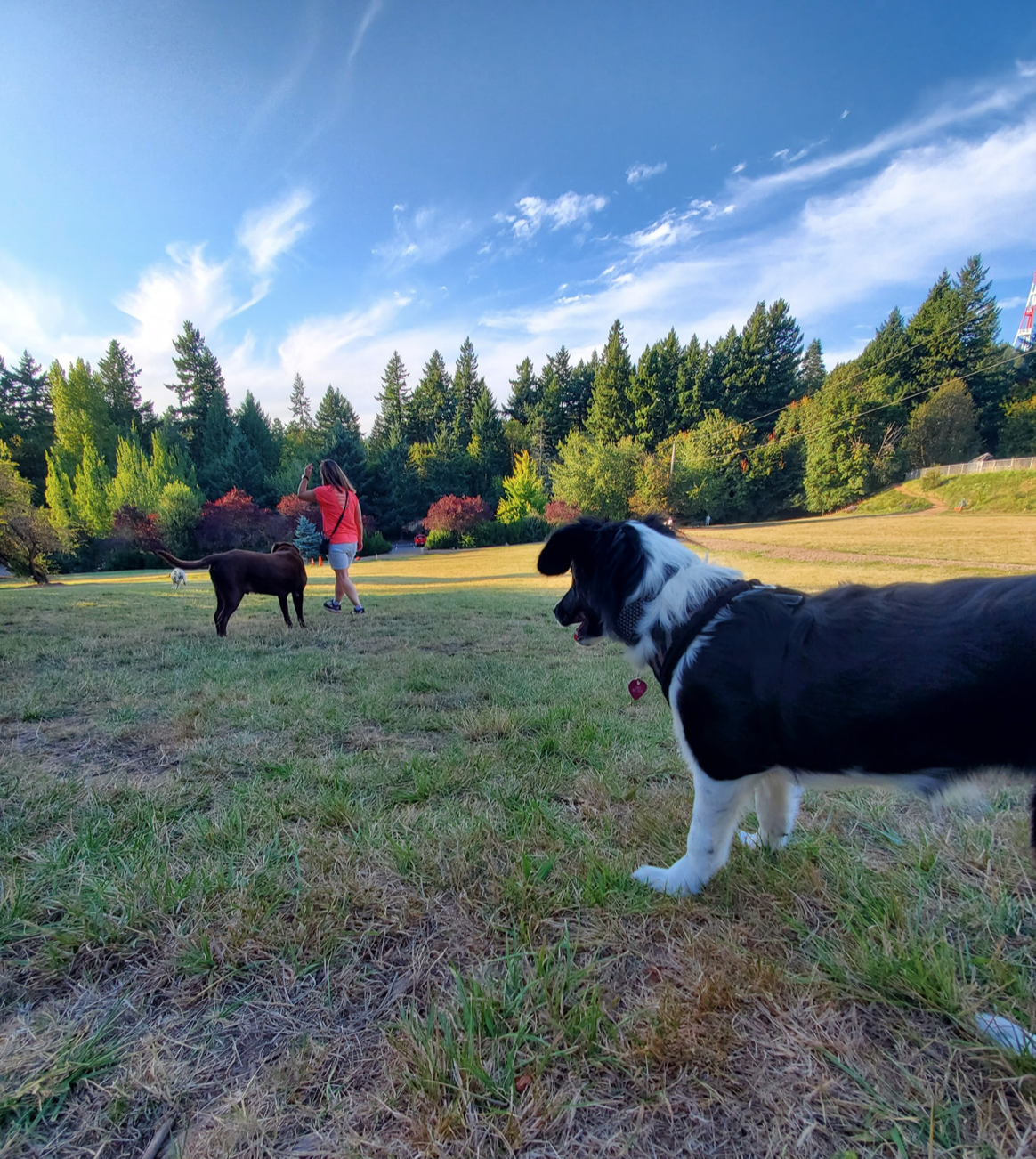 We are fortunate to have so many responsible and invested dog owners caring for the park and aiding in it’s preservation; it takes a village. There are many who provide sweat equity and for those who are unable or unavailable we are hoping you can contribute to the costs it takes beyond sweat to keep our park something extraordinary. There are costs associated with many of the items beyond the donation of time and we are hoping you will provide something towards the out of pocket expenses including grass seed, mulch, barkdust, gas for the riding lawn mower, etc… We all benefit from and enjoy the park because of all that has gone into making it a safe, healthy and secure place to romp and play with our four legged friends.

Keep dogs away from and out of school grounds and both church playgrounds for safety & sanitation.

Please consider parking on SW 25th as an option to the 2 park dedicated spaces available Monday – Saturday at the church.

Dogs are not our whole life but they make our lives whole. Roger Caras

Portland Christian Center and Robert Gray Middle School are our neighbors and we must all co-exist to serve our communities with care. Please be respectful to stay within the confines of the dedicated dog park green space and trails and be kind to our neighbors.

We are responsible dog lovers. We spend our time in Hillsdale Dog Park ensuring our dogs frolick and play while also being responsible pet owners and good neighbors. We maintain trails, seed the worn grass, pick up our dogs poo and karma poos too. We care for the habitat removing invasive species and downed tree limbs. We bring fresh water for the thirsty pooches and we share best practices for our babes health.

Understand personal liability comes with use of the forest trails for any accidents.

When parking in the church lot, please drive SLOWLY as there are children and dogs at play.

Our park is a gem filled with natural boundaries and idyllic conditions for romping – from green grass to forest trails. It also shares its boundaries with Robert Gray Middle School and Portland Christian Center and their daycare. With these in mind, children and churchgoer safety is a top priority.

The city of Burbank received a $150,000 donation this week from the widow of Dick Clark to help transform the southern portion of the Johnny Carson Park (above) into the Dick Clark Dog Park. The effort to build a dog park has been underway since 1997.
Photo by Charles Hirsch / Burbank Leader

After years of dogged pursuit, the city of Burbank is finally getting a park where pups can run free.
The city recently accepted a $150,000 donation from the Kari and Dick Clark Foundation, which will go toward creating a dog park section at Johnny Carson Park.
The dog park project is estimated to cost between $500,000 and $700,000, according to a staff report submitted to the City Council for its Tuesday meeting, at which it voted to accept the donation.
Parks and Recreation Director Marisa Garcia, who presented the report to council members, said in a phone interview that her department will continue to look for funding sources, including grants and additional donations.
“We’re fortunate, especially during these economic times, that we’ve had a great sponsor who wants to come in and help us meet these goals,” she said. “Especially during this current pandemic, we know that it’s extremely important for individuals to be outdoors and recreate in a really safe manner.”

The Dick Clark Dog Park is projected to begin construction in 2022, after an improvement project to the Johnny Carson Park by the Los Angeles Department of Water & Power concludes.
Photo by Charles Hirsch / Burbank Leader

As a requirement of the grant, Kari Clark asked the city to name the dog park after her late husband, Dick, the longtime “American Bandstand” host and prolific television producer. Dick Clark Productions offices were located in Burbank for many years, according to the staff report, and the man was an “avid dog lover,” leading Kari to reach out to the city.
Johnny Carson Park is currently receiving improvements from the Los Angeles Department of Water & Power, which will pay the city for the value of the new trees and irrigation systems. That money, in turn, could be used for the costs of the new dog park.
Construction of the Dick Clark Dog Park is expected to begin in 2022, after the LADWP project concludes.
Council members were highly supportive of the idea to finally build a dog park, with Councilwoman Emily Gabel-Luddy crediting her colleague, Councilman Jess Talamantes, who formerly served on the Parks and Recreations board and pushed for the project.
“I just want to thank council member Talamantes, who doggedly pursued this park,” she said during the meeting. “Ever since I’ve been on the council, he’s raised it and stayed on it and I think we’re very pleased to know that the Dick Clark foundation was able to step up and help us offset the costs for this, and that our staff also took advantage of the drill site and that we will be able to do this.”
A dog park has been intermittently considered by the city since 1997, but budgetary constraints and a limited amount of available land kept the idea from progressing much beyond being an idea. The proposal began to materialize in 2015 when, according to the staff report, the city held several public meetings to discuss the project and find a site, eventually settling on Johnny Carson Park.