The weed-moob theory has been around for years, but due to the illegality of marijuana large-scale, long-term studies just haven’t been possible. With the legalization of pot in recent years it’s likely we’ll soon see more conclusive evidence based on large population sample sizes. And possibly more cases of man boobs. Although we lack statistical data of a direct correlation between marijuana use and the development of man boobs, many physicians and plastic surgeons feel the link is apparent, stating that male breast reduction is on the rise and a majority of recipients self report as weed smokers.

At this point in time there isn’t conclusive evidence demonstrating a correlation between marijuana use and man boobs. Animal studies do show that THC, one of marijuana’s active ingredients, lowers testosterone, reduces the size of testicles, and causes abnormalities in sperm. There’s conflicting evidence whether or not these findings apply to human subjects but there are some studies that indicate marijuana users have lower testosterone levels than non-users, and that early use can delay the onset of puberty, confusing natural hormone levels.

Whether it’s a legitimate concern or a worry for the future, chances are most male cannabis users have thought about the possible correlation between lighting up and developing a certain unwelcome bodily change; man boobs, or moobs as the google search bar so intuitively suggested for me. The clinical name for this phenomenon is gynecomastia and it’s caused when the ratio of testosterone and estrogen is favored by the latter, resulting in excess breast tissue.

It’s sort of a chicken and egg situation. Does the weed smoking give you man boobs, or do you smoke weed because you have man boobs? Just kidding. If, like many before you have, you find yourself worried that smoking weed is causing or going to give you man boobs, rest assured that there are several actually proven causes of man boobs. Medications including antidepressants, anti-anxiety pills, antibiotics, steroids, ulcer medications, and heart medications have been linked to gynecomastia, as well as alcohol and street drug use. Man boobs are also largely linked to various health conditions including natural aging, hyperthyroidism, malnutrition and… wait for it… weight gain. Even herbal products such as tea tree oil and lavender lotion are linked to man boobs. Long story short, I’d wait until there’s conclusive evidence before making the decision to quit your cannabis use solely to avoid man boobs. Perhaps try to imagine the crushing regret of waking up 15 years from now with man boobs anyways, realizing you could have just smoked weed the whole time. 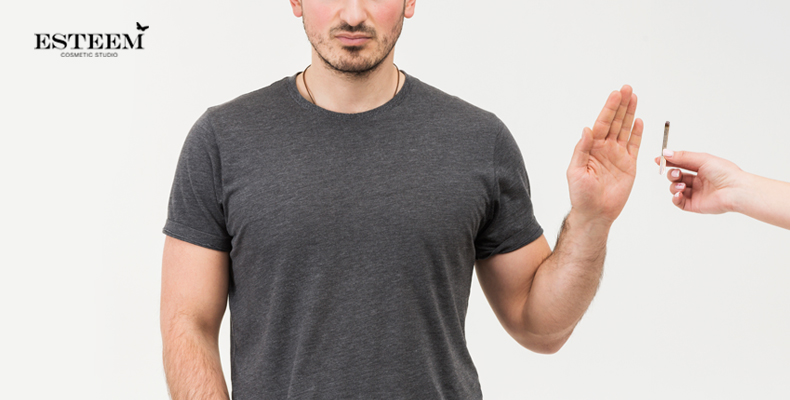 Although the association between marijuana and gynecomastia hasn’t been conclusively proven, it appears very plausible.

While there may not be any definitive evidence as yet linking marijuana use and gynecomastia, the medical community has suspected a link between marijuana and man-boobs for decades. However, due to the drug’s status as an illicit substance in most countries, there hasn’t been sufficient research to confirm these speculations.

Besides those instances where gynecomastia may occur as part of the body’s natural changes throughout a man’s life, the condition may also be caused by certain illnesses and medications, including: hyperthyroidism, tumours, anabolic steroids, kidney failure, malnutrition, liver failure, chemotherapy, heart medications, and antidepressants.

Animal studies have shown that exposure to the active ingredient THC in marijuana can result in a decrease in testosterone levels, abnormalities in the form and function of sperm, and a reduction of testicular size. Nevertheless, it is still unclear as to how exactly marijuana and smoking weed affects hormone levels in humans, but there is significant anecdotal evidence to suggest that regular marijuana users have lower testosterone levels than non-users and that heavy doses of the drug may delay the onset of puberty in young men.

Like many of the medications listed above, marijuana can act as an estrogen stimulator. Various preclinical studies have found that marijuana use can both increase estrogen production in men and decrease testosterone production which may lead to gynecomastia. The exact reason for this is not yet known. One theory is that THC, the psychoactive component of weed, blocks the release of GnRH, which is a hormone that triggers the production of other hormones, including testosterone.

Interested in Gynecomastia Surgery? Call the team at Esteem Cosmetic Studio on 1300 378 336 and schedule an appointment for an in-depth consultation.

Young men who use marijuana through puberty may find that that their transient, temporary breast enlargement, normally associated with puberty, become permanent because as their testosterone levels are altered by marijuana use, their normal/natural hormone development may be interfered and adversely impacted. These men may find that they have more breast tissue when they’re done with puberty than they would have otherwise had if they did not smoke marijuana

Once again, thank you very much for reading our blog. If you have questions, feel free to fill-up the form at the bottom to drop us an email. One of our staff will respond to you shortly.