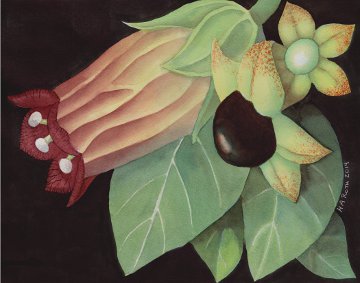 Belladonna is a traditional West European magick herb associated with Saturn , like its cousins hellebore , henbane , and mandrake . As one of the baneful herbs, it is used in works concerning death and death’s opposite – healing. The name "Belladonna" is said to be derived from the fact that Italian women at one time made drops from the plant which caused their pupils to dilate and thus made them more desirable, but perhaps it is instead a reference to this plant’s dedication to the Goddess (the Beautiful Lady) and historically it was used in rituals honoring a Roman goddess of war, Bellona. Even now, parts of this plant are helpful inclusions in fumes dedicated to making war. European witches used this plant in flying ointments, extracting its constituents into fat and rubbing it on the skin, so it had a place in every witch’s garden. It is still traditionally associated with astral projection, but this plant is especially Saturnian in that it is said to create feelings of heaviness rather than lightness, being dragged down to the ground rather than flying. In traditional witchcraft, belladonna is typically sung to upon harvesting. Some even dance naked in front of the plant. This is in keeping with some cultures’ use of belladonna for sex magick. Don’t try this at home, kids–belladonna is, to my mind, the single most tricky of all the nightshades. I love it, and it is a beauty, but I would not think of ingesting it.

Belladonna grows 2-5ft/60-150cm tall with coarse, large leaves and odd brownish purple flowers that appear to be veined. The flowers have a slight coldly sweet scent right up close. Its Latin name comes from the Greek fate Atropos, who was responsible for cutting the thread of each person’s life when the time comes, a well chosen reference, since this plant can be fatal to humans and is poisonous to all carnivores. It is especially dangerous for children, who are particularly sensitive to its poisonousness and sometimes attracted to the shiny, handsome berries. Either don’t plant this where children play, teach them that it is a poison, or just snip off the flowers as they wilt–the plant will then produce no berries. Always wear gloves when handling belladonna. This plant is highly unpredictable in its action on the human body, which adds to its dangerousness. to my mind, it has many Fae qualities, even though it is not normally identified with the Good Folk. Belladonna is a lso known as Dwale, Banewort, Devil’s Cherries, Naughty Man’s Cherries, Divale, Black Cherry, Devil’s Herb, Great Morel, and Dwayberry. Best planted on a Saturday. Top